skip to main | skip to sidebar

Good news for the 14 time Olympic gold medalist. A South Carolina sheriff announced that charges will not be pressed because the above photo does not provide enough evidence to charge him because it is impossible to confirm the contents within the pipe. And we all know what that means....

LET"S MAKE IT RAIN ON THEM SKRIPPAS! 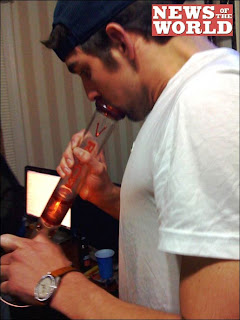 Page Six is claiming that since the above photo surfaced, Phelps has been extremely aware of photos taken of him during his extra-curriculars. He has reportedly had the windows of his Baltimore house tinted to prevent paparazzi from snapping shots of him at home and has been "hiding out at strip clubs," since they're the only places he can party with no pictures being taken.

When the photo first surfaced a few weeks ago, it seemed as though the outcome was grim. First Kellog said they would not renew their contract with Phelps when their deal expires at the end of February 2009. Then USA Swimming annouced that Phelps would be suspended for 3 months, banning him from competitions and ceasing his monthly stipend of $1,750 a month from the organization during the suspension.

Several of Phelps’s sponsors, including Speedo, Omega and Visa, have accepted his apology. Others, including Subway, have not taken a position. As it stands, Phelps’s actions have put a dent into his sponsorship spoils, which some marketing experts say could reach $100 million in his lifetime.

And for those you are not mathmetically inclined, thats a whole lot of lap dances that will never happen in the champagne room...
Posted by T-Marie at 2/18/2009 1 comment:

Happy Star is a multi-dimensional, cosmic wonder. He's that ever-elusive being, that mothers tell their daughter's to save themselves for. Chuck Norris has NOTHING on Happy Star. He will serve you up a dish of badass, with a invincible smile on the side.

And he will save your life...

Is Allen Iverson a product of the "Obama Effect"?

2009 is a year for change, not only in the White House...but other places as well. Case in point, Allen Iverson's hair. After 13 years of intricate braid and cornrow designs, A.I. has cut it all off! 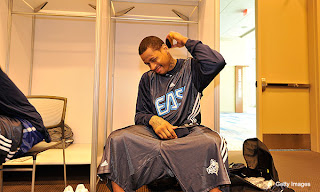 Go 'head and get your grown man on - I ain't mad at ya. Just makes sure you make it to practice. :)

It's been a few days since I watched the 2009 NBA All Star slam dunk contest, but I've continued to replay in my mind, the spectacle that was Nate Robinson that night.

His performance dazzled and captivated everyone. I felt pure, euphoric giddiness watching him!

Pour one out for Eddie Jordan 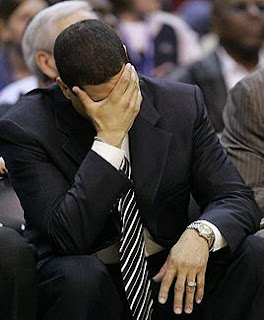 Shaunie and Shaq out together...again 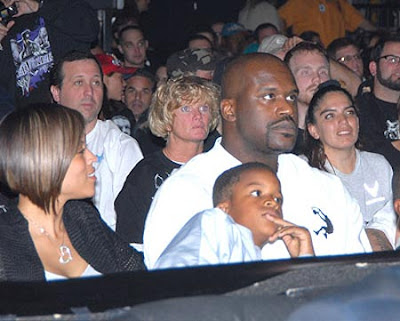 First the divorcing couple were spotted out together with the kids. Not too shocking. After all, at the end of the day, every parent wants to provide stability and unity as a family for the sake of their children.

THEN, the two popped up together looking EXTRA cozy while attending Muhammad Ali’s Celebrity Fight Night charity in Phoenix on April 5.

Now alas, another spotting. The exes were spotted, with their son in tote at the Wildlife World Zoo last weekend.

Could there me a reconciliation in sight? I hope so. Even more so, I hope they know a good marriage counselor...
Posted by T-Marie at 4/16/2008 1 comment: